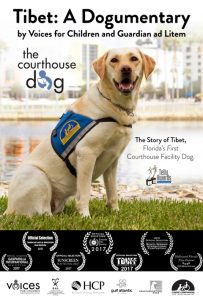 This is the sixth film festival screening for the “Dogumentary” which tells the story of how Guardian ad Litem (GAL) volunteers, former Voices for Children of Tampa Bay Director Betsy Smith and GAL volunteer Brenda Kocher were able to bring the Courthouse Facility Dog Program and the film’s star, Tibet, to the Hillsborough County 13th Judicial Circuit in Tampa, Florida.