It’s hard to swallow the end of an era with the purchase of the Tampa Tribune by the once competitor, the Tampa Bay Times. While the writing was clearly on the wall, it is still hard to see legacies end, yet it is refreshing to see the vitality potential in the bay area newspaper business.

Our roots and relationships with the Tribune are deep. As a native of Tampa we grew up learning the essence of journalism and its duty to the community by following our local newspaper. Dating back to when Stuart Bryan was sent to Tampa in the 60s to learn the business, I have had a special relationship that is hard to describe. Red Pittman, the first editor to see the opportunity of my engagement got me started both in journalism and aided my education with scholarship money to attend USF. While I opted for a broader marketing career with Procter & Gamble in Cincinnati, Red never stopped communicating and said there would always be a place for me should I return. 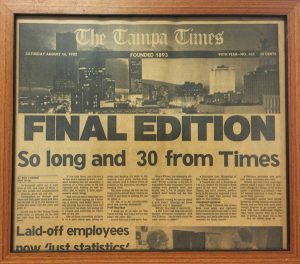 Return I did; in the early 80s…and one of my first engagements in professional marketing was support for the Tribune in the evaluation of new product ideas. We were also engaged in the transition of the Tribune at the closing of the Tampa Times (our evening newspaper) in 1982—and I still have the last edition framed in our office as a reminder.

Later under Doyle Harvill, formerly Hill & Associates, (now HCP) was asked to review marketing approaches and positioning of the paper in the community with an emphasis on early competitive pressures of the St. Petersburg Times. Shortly thereafter, we were challenged with the task of learning how a TV station (WFLA) and a newspaper (The Tribune) could work together (a true case of oil and water, at the time).

By 1994, the beginning of the evolution of Internet marketing and communications was a focus of much of our work. We participated in the launch of TBO and worked with both newsrooms on positioning one event after another. The “grand launch event” was met with curiosity and a slow build, but ultimately became the basis for much of the news focus, ultimately helping to bridge the gap between broadcast and print markets.

Over the past 30 years, our firm has been engaged in so many projects its hard to recall each and the resulting outcomes. New products, acquisitions, field studies on consumer attitudes, advertising modeling and a wealth of studies in secondary markets all focused on balancing costs, reader interest, and advertising return on investment.

In total, HCP Associates and its predecessor served nine publishers and their executive staff. A long relationship with the parent (Media General) during most of the engagement resulted in related work for both the parent corporation in strategic planning and detailed work for many of the sister properties in syndication, print products and broadcast.

As we look at the transition to a new day in Tampa Bay, perhaps the most memorable moments come from the challenges and joys celebrated with some of the smartest and best people I have had the privilege of working with. We were blessed to have journalists and business managers that really cared about Tampa and had an appreciation of their role in helping to shape a future. The friends made over the years of engagement are here to stay. While many have passed, their memory and their commitment to a high standard will be remembered.

The Times Publishing Group acquisition will certainly assure that Tampa will be blessed with a healthy newspaper serving the public. They are fine journalists, and clearly care about the communities they serve. It is a new era for Tampa and I’m confident that this move will assure that a vibrant newspaper will be a major part of the fabric that makes Tampa a great city now and in the future.